With the recent addition of quite a few new Cubs to 2nd Gordon, and many of our more senior Cubs eager to achieve the Grey Wolf peak award, we decided to run a Leadership Course for our current and soon-to-be Patrol Leaders and Assistant Patrol Leaders. The objective was to challenge the older Cubs and instill a sense of leadership – and to have some fun!

We started with the Cubs lighting a fire and cooking themselves (and the Leaders!) some sausages. As with all of the activities today, the role of the (adult) Leaders is to provide supervision and coaching – and to let the Cubs “learn by doing”.

The Cubs demonstrate their ability to light and maintain a fire, and cook a healthy(ish) lunch. We also discuss fire safety. 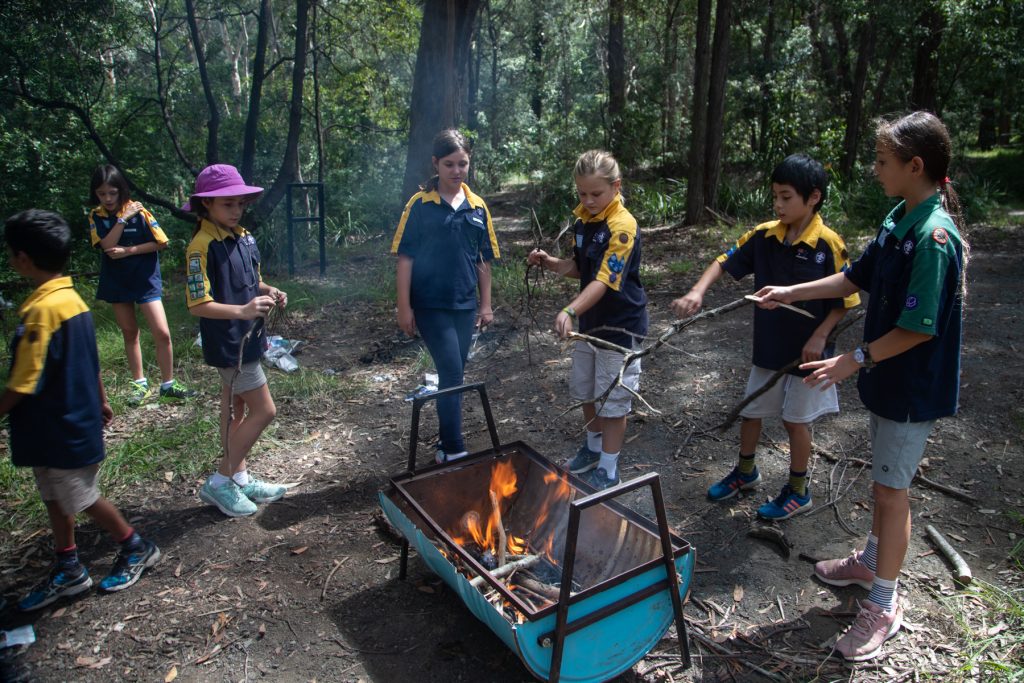 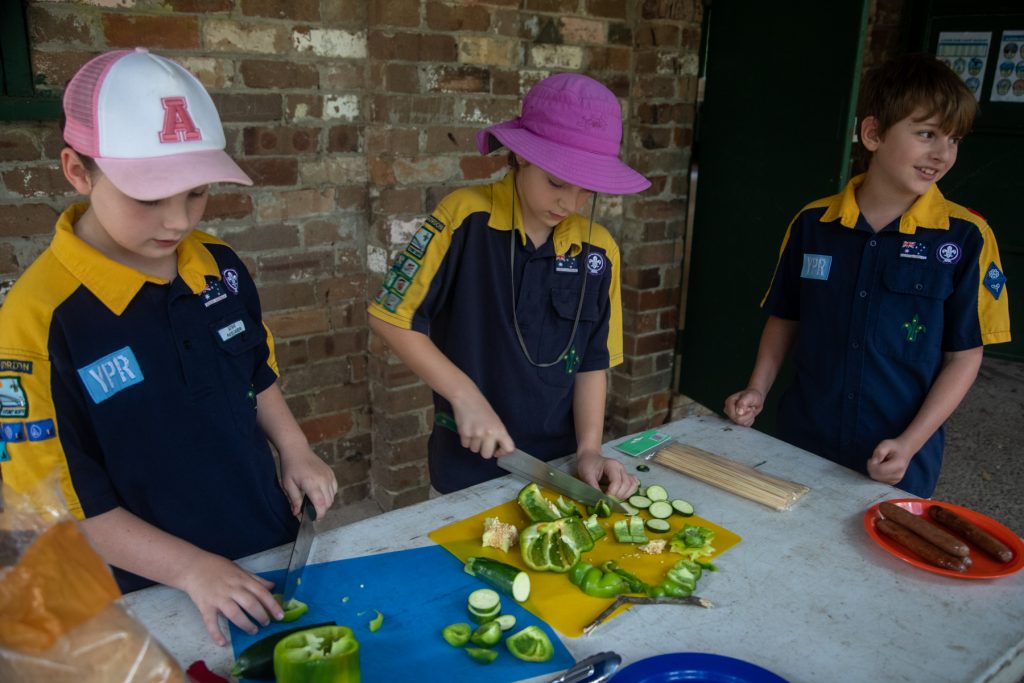 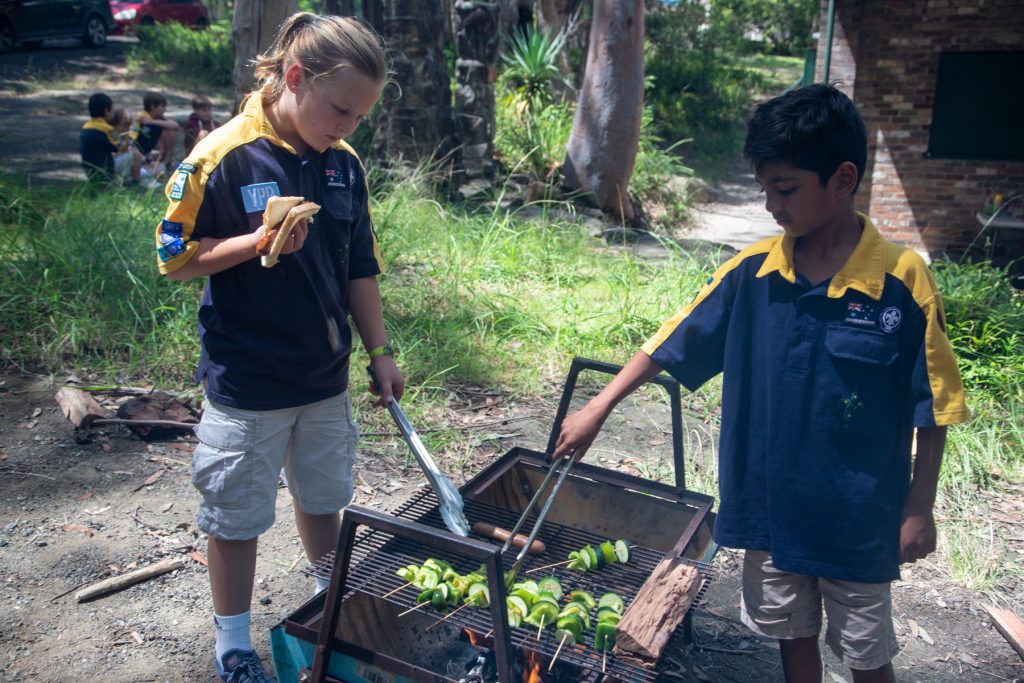 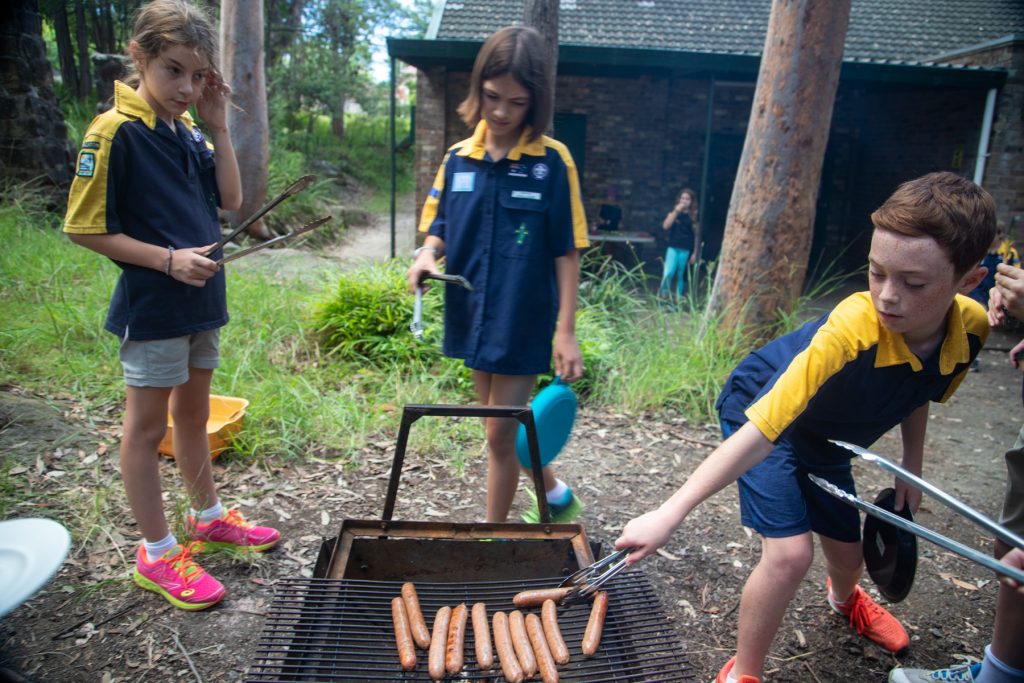 Having enjoyed lunch, we’re onto our first activity. The ability to navigate and read a map is an important skill, especially for Cubs who are linking (moving up) to Scouts.

The Cubs demonstrate their ability to identify features and landmarks on a topographical map, followed by relay race competition to identify specific features. 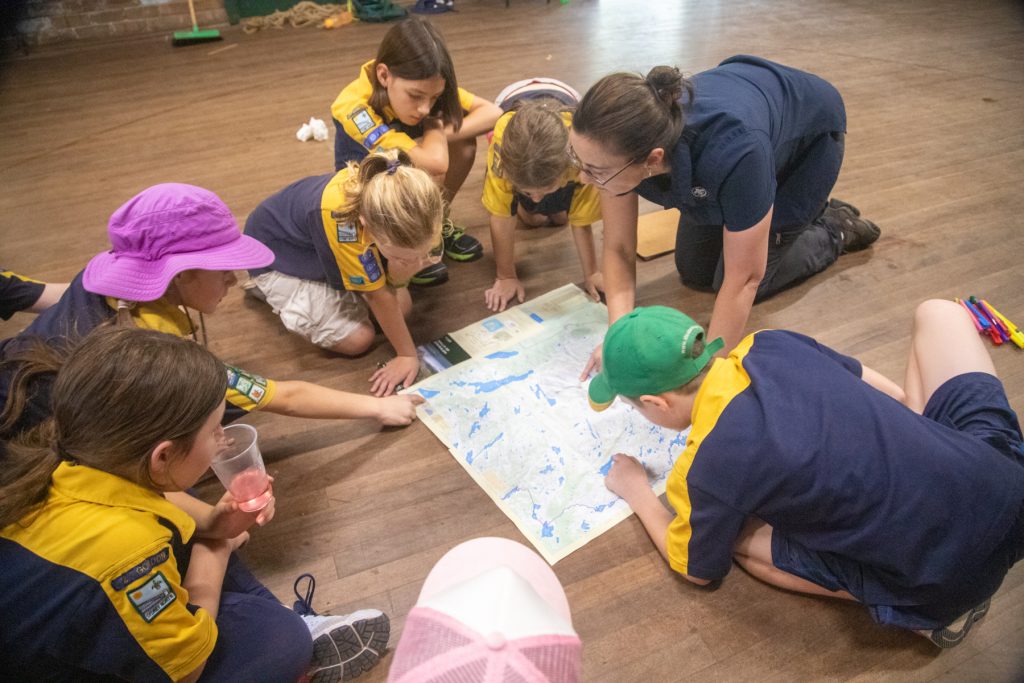 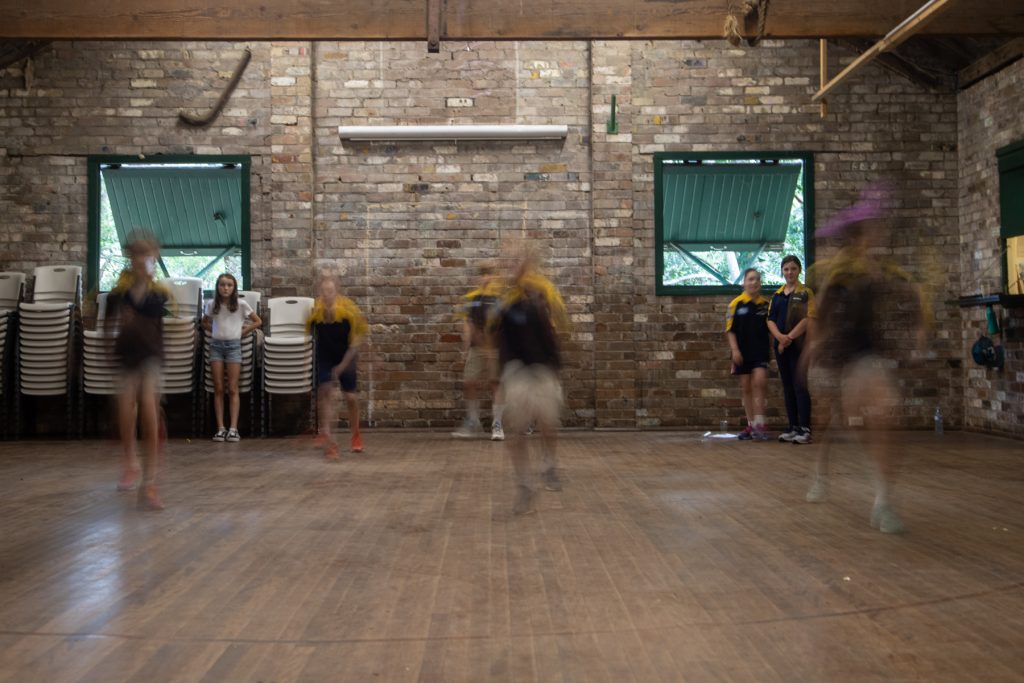 We’re joined by a Cub parent and Special Guest for our next activity: Brian has over 30 years experience in facilitating leadership and developing teams. He’s created an engaging program for our Cubs to help them understand and put into action what it means to be a great leader, and how to effectively lead their patrols.

The Cubs discuss what a good leader should do – and what they shouldn’t do – and participate in some team-building activities to reinforce the desired behaviours. 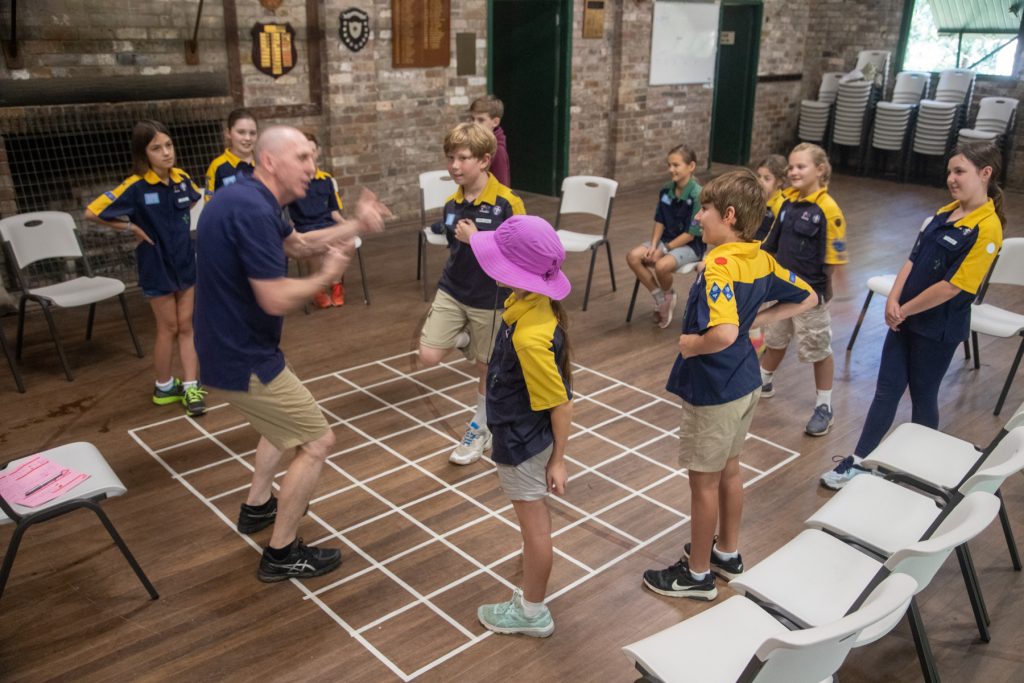 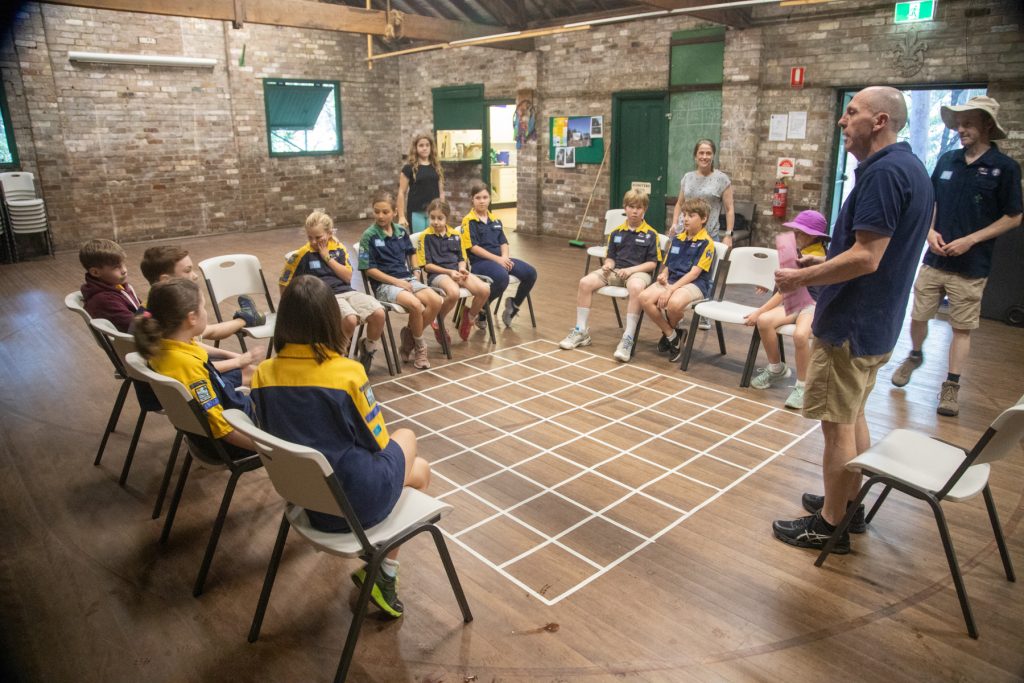 The Cubs enjoy a team game where they need work out the right sequence of squares to take, in order to successfully cross a 16×16 grid! Next, we have some of our Scouts join us to lead the M&M Challenge… it’s a great way of learning the clove hitch and square lashing by building a table from some basic materials. Why the “M&M Challenge”? Once the table has been constructed, a bag of M&Ms are released on the table. The team with the least M&Ms rolling off the table and onto the ground wins!

The Cubs compete in two teams to build the most level table, using only ropes, bamboo poles and a timber board. 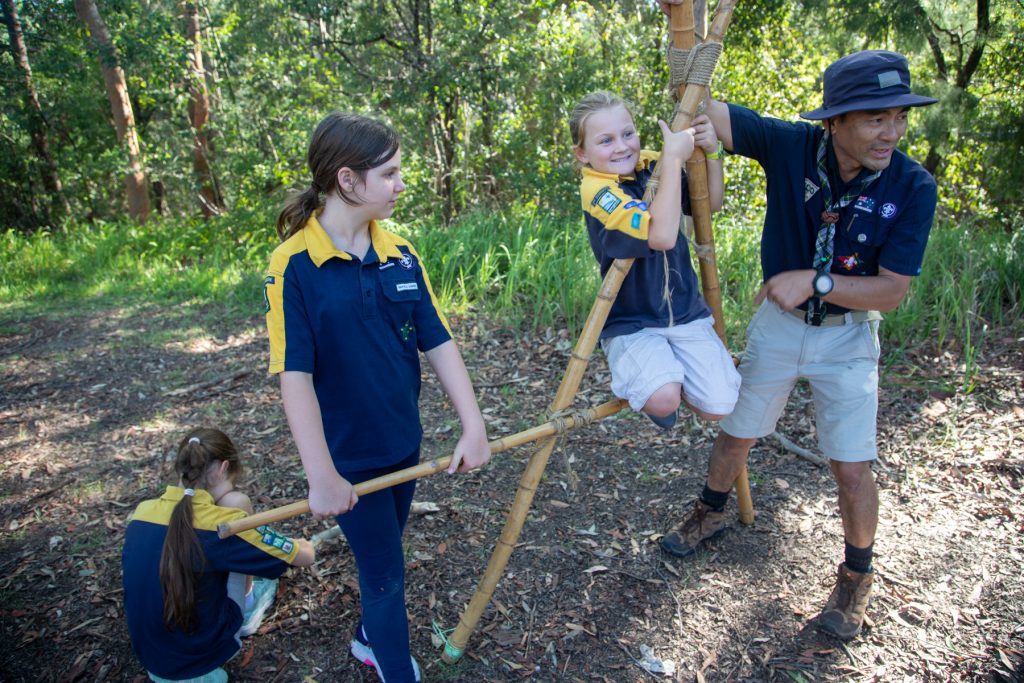 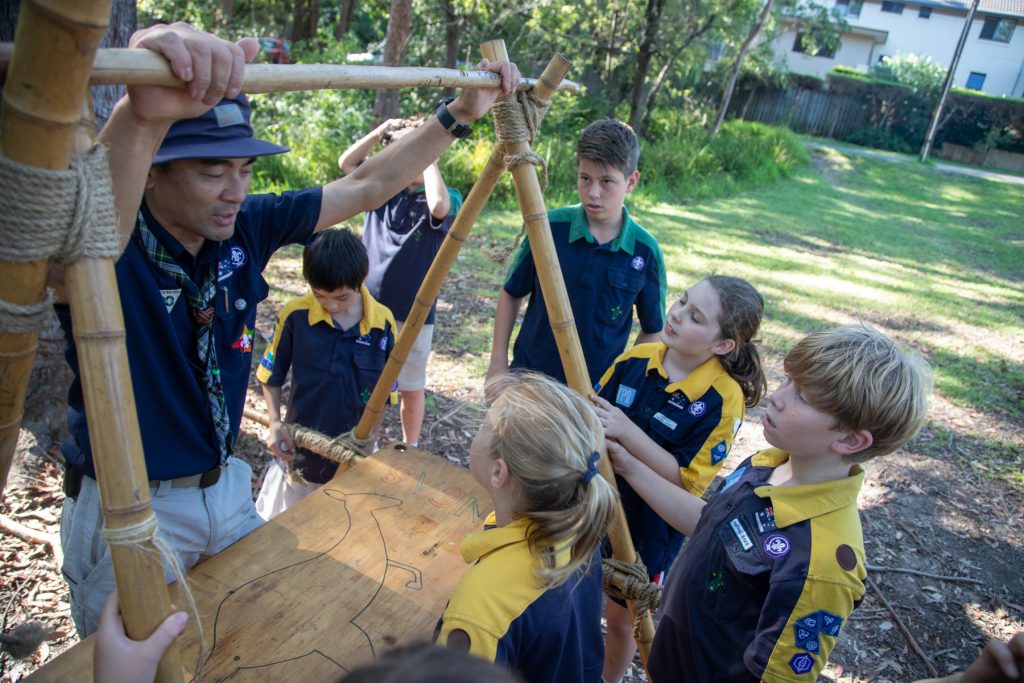 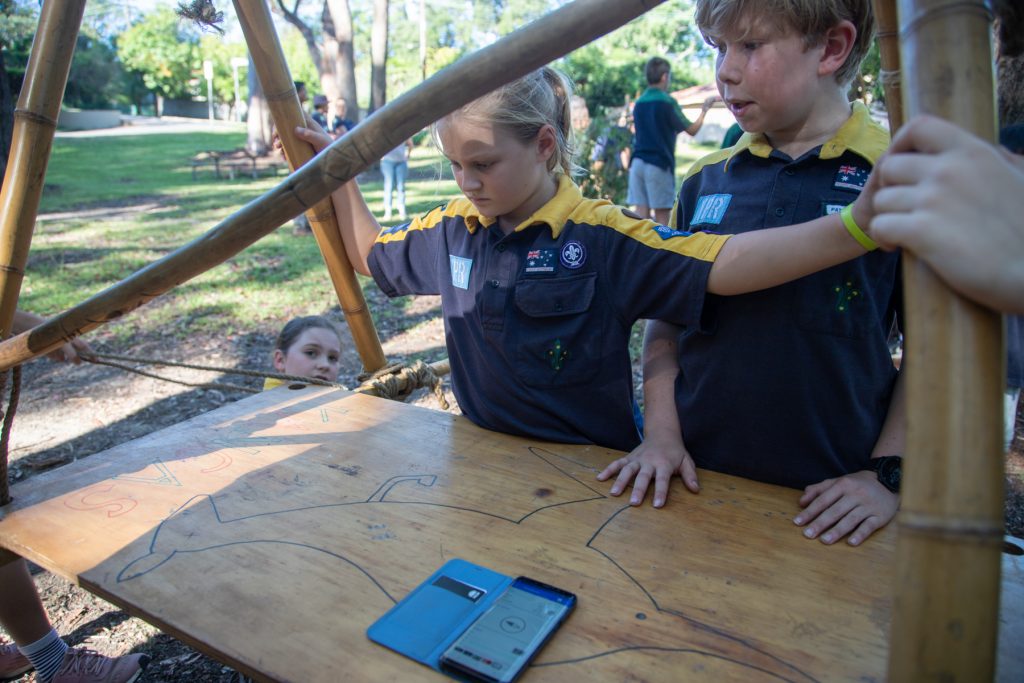 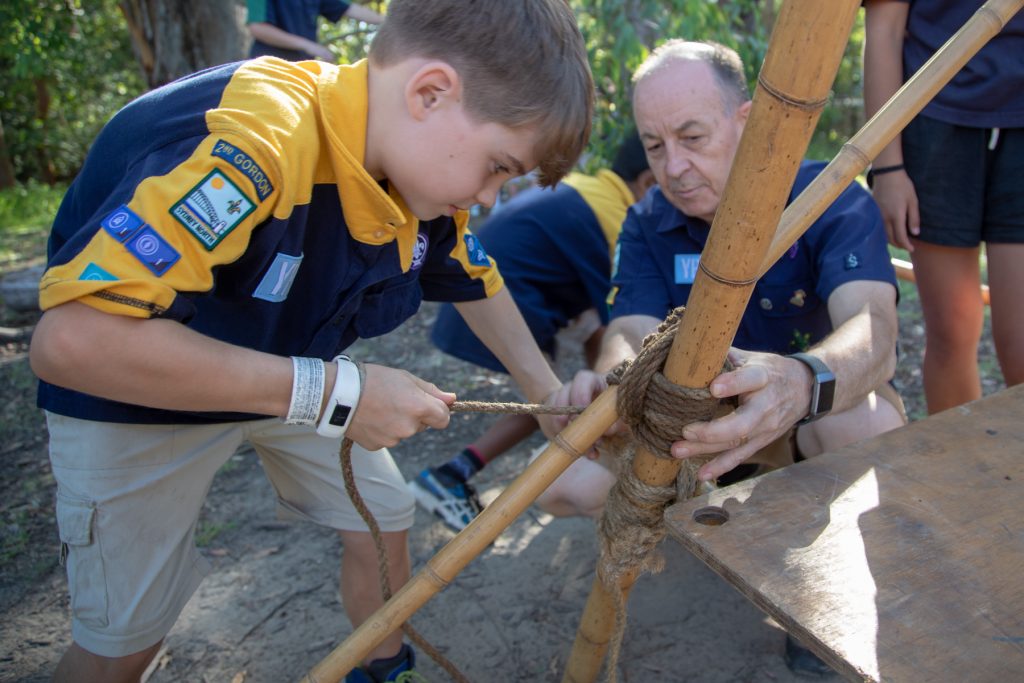 There’s tension in the air as Glenn, one of our Scout Leaders, unleashes the M&Ms to see which of the two teams will emerge victorious…

It’s almost time for dinner… time flies when you’re having fun! Unfortunately, it’s inappropriate to set the Cubs a challenge to see which team can mix the best cocktail (the Leaders were about ready for a drink)! Instead we give each of the four groups of Cubs the same ingredients (mince, pasta, crushed tomatoes & tomato paste, flour and some spices) and ask them to cook dinner, using outdoor gas cooktops we’ve borrowed from the Scouts and the firepit. The Scout leaders and Scouts also talk to the Cubs about hygiene and safety techniques when using gas and cooking over a cooktop or fire.

The Cubs work together in small teams to cook a meal using a set of ingredients, a gas cooktop and the firepit!. 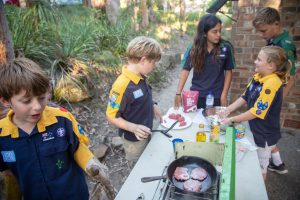 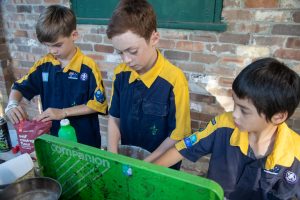 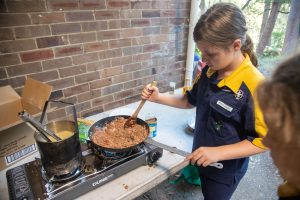 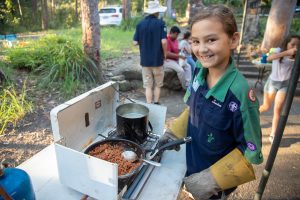 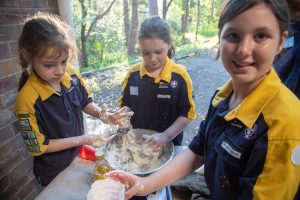 Of course, the success of this activity is determined by the outcome! The Leaders (and Scouts) were impressed with the results served by our junior outdoor chefs, with tasty spaghetti bolognaise and perfectly cooked damper rolls. One trio ignored the suggested recipes and cooked hamburgers, which turned out perfectly! Though perhaps the most rewarding feedback, the following day, was one of the Cubs keen to practice their new-found skills at home: “Grace thoroughly enjoyed the day and is keen to make us some spaghetti bolognese, which is a bonus!” 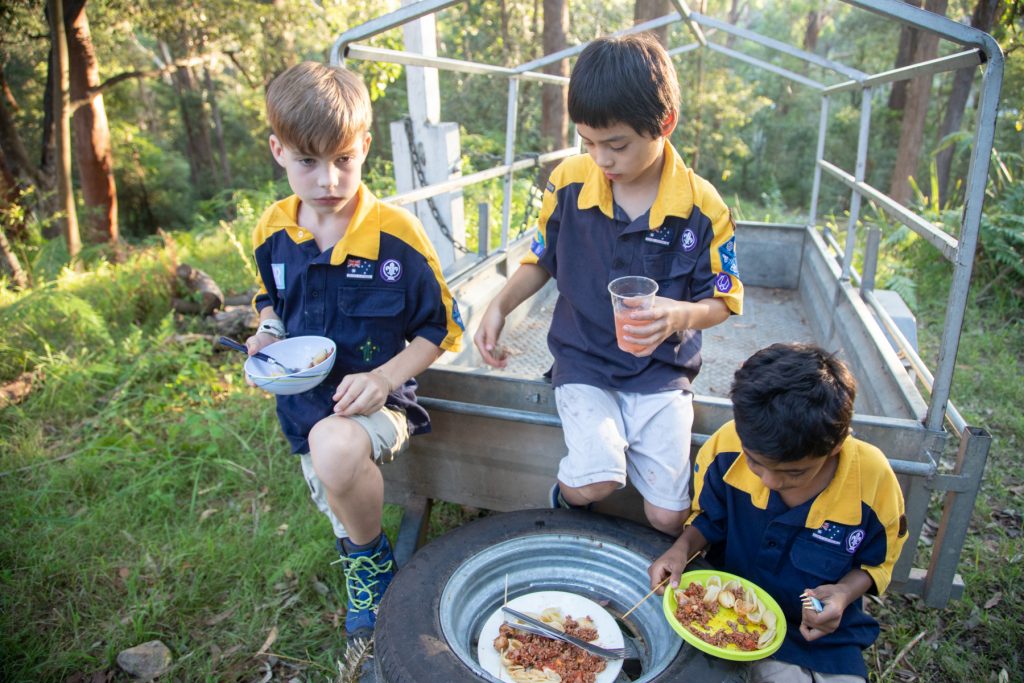 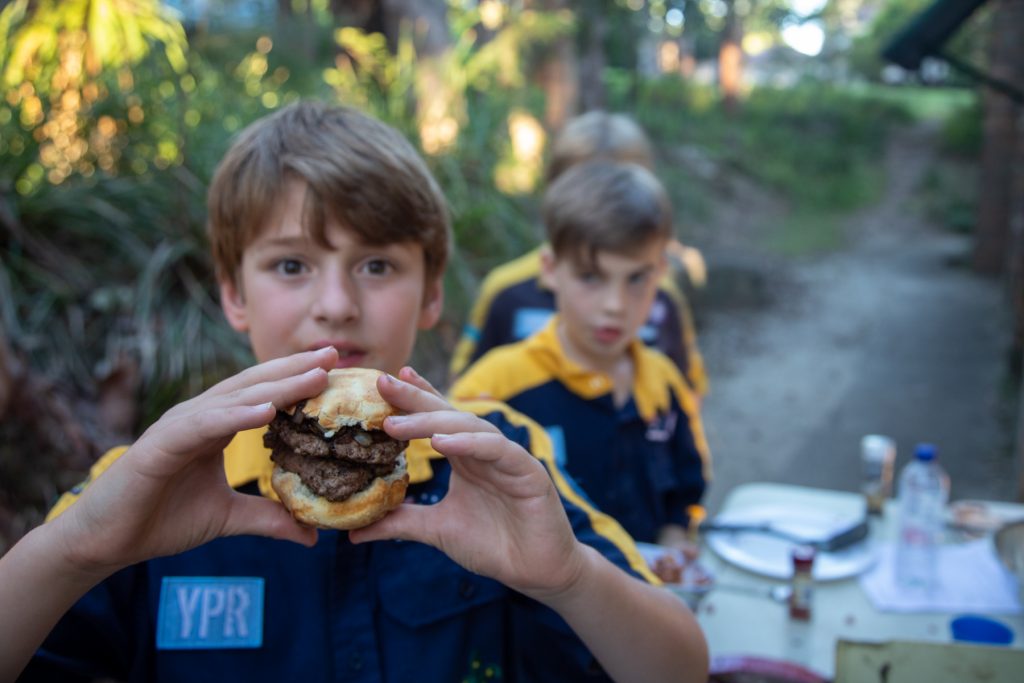 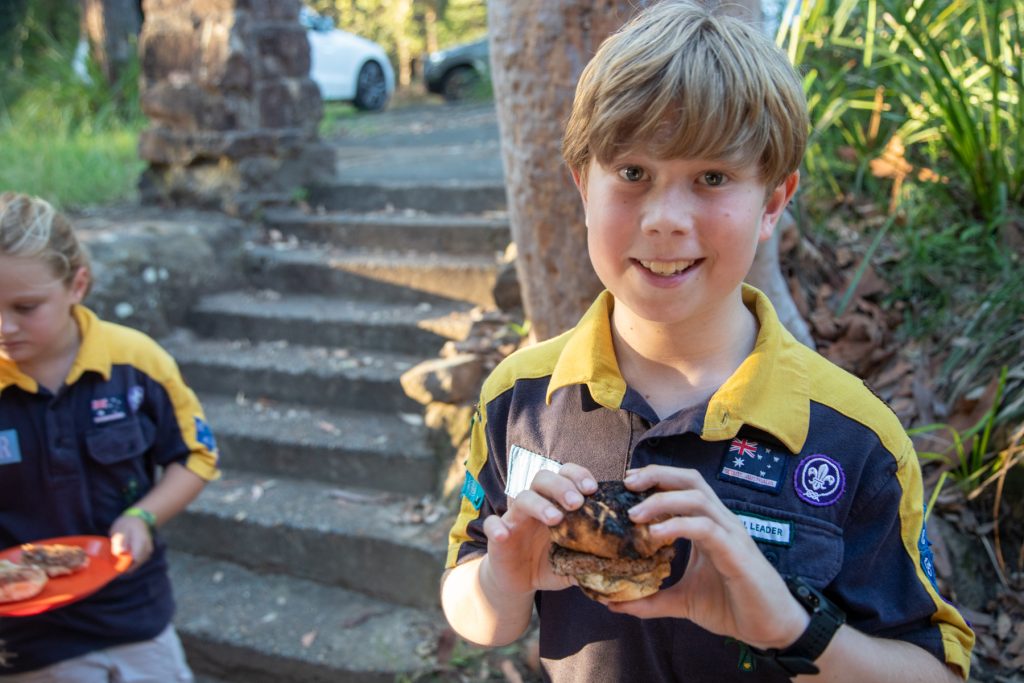 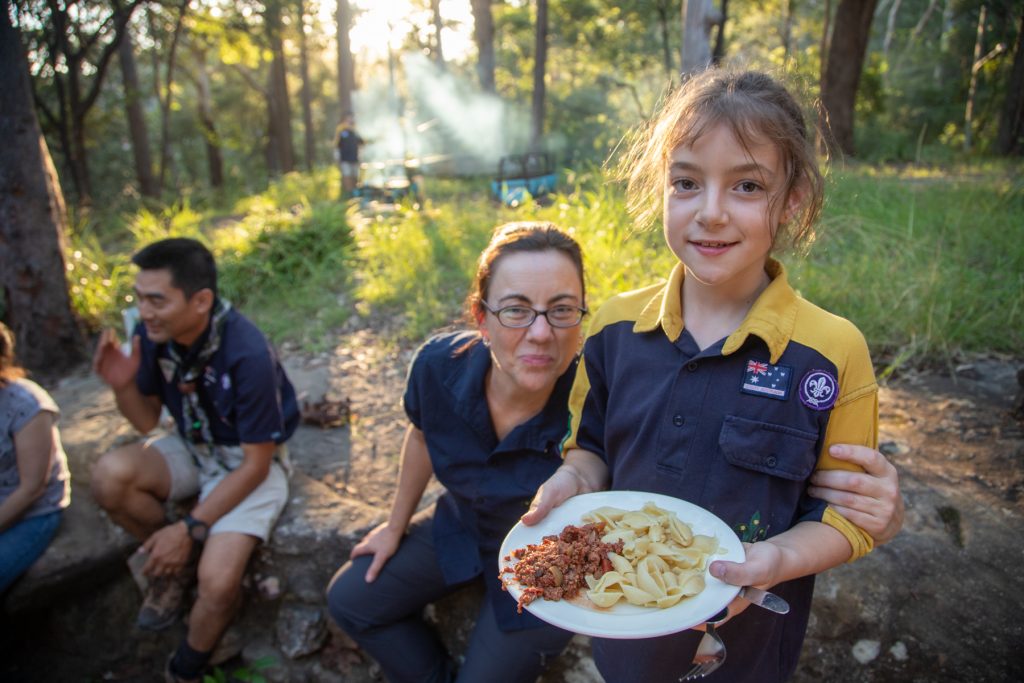 No dinner would be complete without dessert, and with less than half an hour before the Cubs are due to finish, they’re using the embers of the firepit to make some s’mores. “A dessert or snack made of marshmallows, usually toasted over a campfire, and thin slabs of chocolate, which are then sandwiched together between crackers”, the invention of s’mores is generally credited to Loretta Scott Crew, who made them for Girl Scouts by the campfire in the 1920s.